Join the South Bronx Community Congress, Coalition to Protect Chinatown & LES, and many others to put Mayor de Blasio on notice, that our communities demand community-led rezoning in the new year.

The Coalition to Protect Chinatown and the Lower East Side achieved success with their weekend town hall on Saturday afternoon. It was an event planned to discuss neighborhood displacement and demand that City Hall endorse the Chinatown Working Group Rezoning Plan. Organizers invited Mayor de Blasio “to attend, calling on him to end Silver’s corrupt legacy of protecting real estate interests over the people’s interests by endorsing a community-led rezoning plan.” 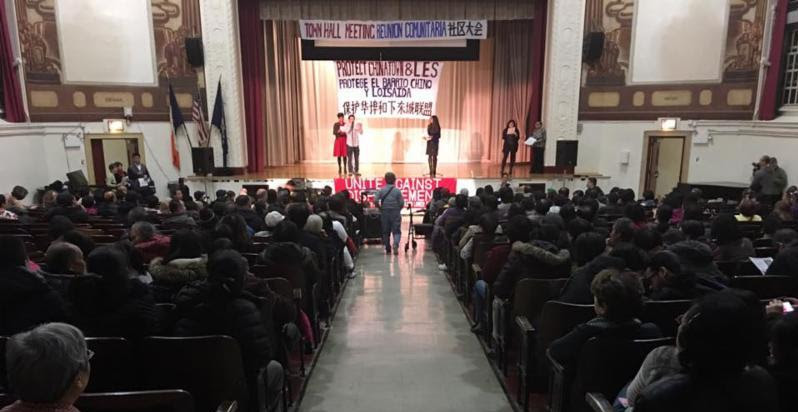 Over 700 concerned residents, small business owners, workers, and supporters attended a Town Hall meeting on the evening of December 5th at Seward Park High School to discuss the future of Chinatown and the Lower East Side and to demand Mayor de Blasio act now to protect our community. The mayor’s failure to endorse the Chinatown Working Group (CWG) rezoning plan has elicited anger and distrust from the community. The Coalition invited Mayor de Blasio to the Town Hall to face his constituents and tell them why he has not come out to support the CWG rezoning plan.
Notably, the Mayor was not in attendance. Instead he sent a community liaison who promised to hold a meeting with a few people present. When asked whether the Mayor would support the CWG rezoning plan, the liaison provided no answer, but instead asked the crowd if they would be willing to compromise on the plan. The crowd responded with a resounding “No.” 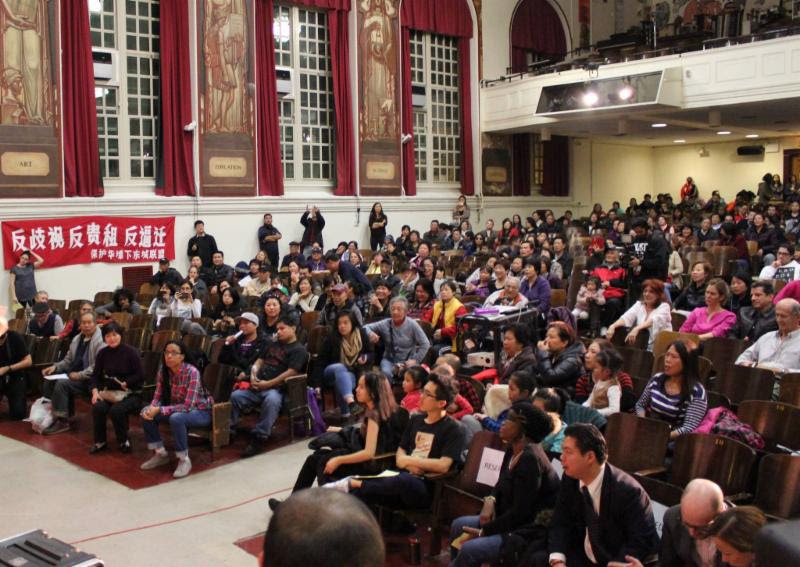 “Since 2008 when the East Village Rezoning Plan was approved, which gave protection from displacement to the majority white, wealthier community just north of us, we’ve seen so much more luxury development in the LES and Chinatown–because we were excluded from protection! We want equal protection. That is asking for too much?!” said Jacqueline Herran.
Louise Velez said, “In NYCHA they’re not doing repairs, there’s no heat, they want to transfer us to another borough. In private apartments, they’re also trying to get us out, by not making repairs and then calling the Buildings Department to say it’s not safe and we need to get out. Tell me, where are we going to go?”
Added Jinming Cao, “You want us to wait to have a meeting to compromise. Our community cannot wait any longer. We have been waiting for seven years. For every day we wait, how many working families and small businesses will get evicted? For every night we wait, how many people will sleep in the cold with no heat and no hot water?”
Outrage grew as the crowd made it clear that they had already compromised enough. “You say compromise. By compromise you mean you want to push out all the Chinese, all the Latinos, all the African Americans, all the poor!” shouted one audience member. 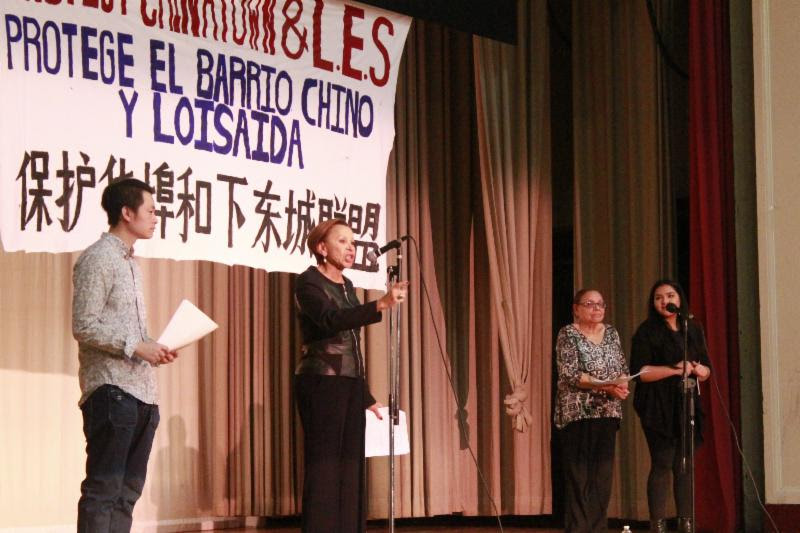 “Twice our community marched to City Hall; we have repeatedly reached out to de Blasio, urging him to adopt our community-led rezoning plan,” said Norma Ramirez of Action by the Lower East Side. “His a
bsence here today is a slap in the face. Instead of representing the working people who put him in office, he has shown that he, like Sheldon Silver, represents the developers who want to destroy our community.”
Congresswoman Nydia Velazquez was applauded for her support of the CWG rezoning plan. “I support the Coalition to Protect Chinatown and the Lower East Side. The local community must have a voice in decisions that shape our neighborhoods and our day-to-day lives. We must stand against housing discrimination and work to bring under control rising rents in the Lower East Side and throughout our City.” 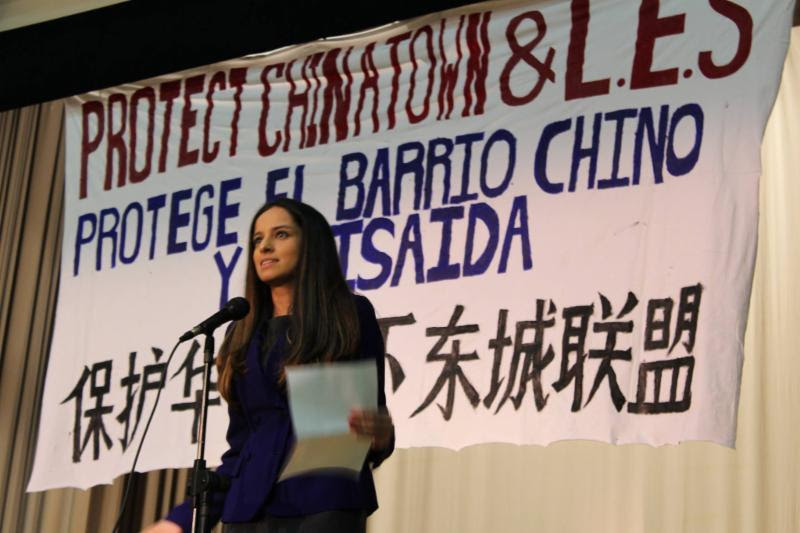 District Leader Jenifer Rajkumar who was also in attendance stated, “We stand in solidarity to save our neighborhood. We stand against the displacement of thousands of families on the Lower East Side. Through this Town Hall our community will come together to find solutions and a way forward.”
Participants of the Town Hall agreed to take the fight to the Mayor’s home at Gracie Mansion. We will hold a city-wide rally together with organizations across NYC on Wednesday, December 16, 2015 at 4:00pm.
When the emcees asked, “Are we ready to go to Gracie Mansion?!” The crowd responded with a resounding “Yes!”

Organizers invited Mayor de Blasio “to attend, calling on him to end Silver’s corrupt legacy of protecting real estate interests over the people’s interests by endorsing a community-led  rezoning plan.”

Under de Blasio’s plan, the rapid sprawl of gilded glass towers piercing the skyline will rob everyday New Yorkers of affordability, history, sunlight and perhaps most important, their precious sense of community and neighborhoods.

This is an EMERGENCY CALL TO ACTION!

Mayor de Blasio is attacking working families and people of color time and again by pushing luxury development in the name of creating “affordable” housing. In the Lower East Side and Chinatown, he has blatantly rejected a community-led rezoning plan seven years in the making. He has rejected similar efforts for an alternative plan in East New York, Brooklyn and is set to do the same for Jerome Avenue in South Bronx and Flushing, Queens. This past month, nearly 50 Community Boards rejected his mandatory citywide zoning, yet the Mayor responded by saying their opinions didn’t count. He has betrayed the trust of the people who voted for him, continuing Bloomberg’s legacy.

It is clear the Mayor’s solution to end the Tale of Two Cities is to destroy all of New York City. Each neighborhood is being stripped of its own unique, distinct character to make way for ultra-luxury high rises. There is another way to end the Tale of Two Cities, by building a multi-ethnic coalition of communities across New York City. We are calling on everyone to unite and say “No” to Mayor de Blasio’s developer-led rezonings, “Yes” to community-led rezoning!

in front of Gracie Mansion